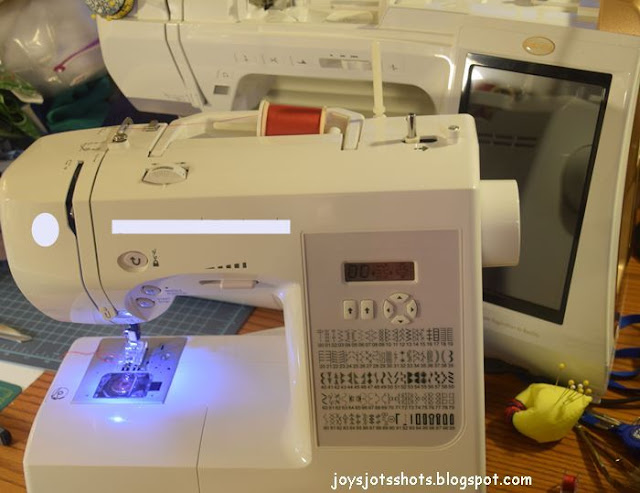 I recently received a generous donation from a Quilt Guild friend.
Thank-you SO much Angie !
These machines will be used for sewing classes especially the private school
I gave lessons this last September.
While I had the machines out to clean them, tweak them and see what they could do,
I was reminded of the question I've been asked MANY times:
"What machine would you recommend I buy for my child (or myself a beginner)?" 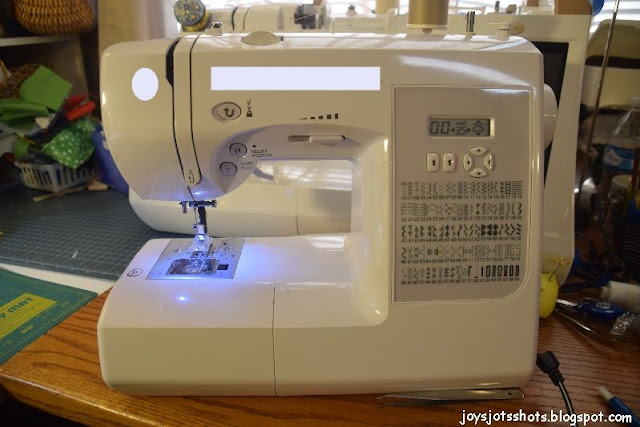 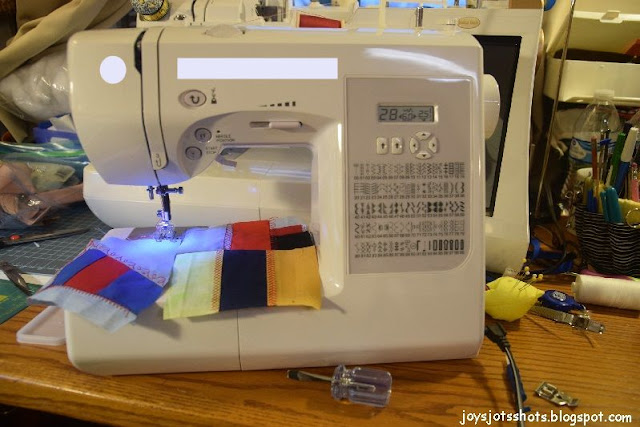 Before I mention the features, let me get on the soap box and preach about price first. Many, many times I've had parents to bring me their daughter or son with their new machine. Has they hand me the machine, the explanation starts. "I've bought the cheapest machine first, because I wanted to make sure this was something they really wanted to do before I invested a lot of money." At that point I want to ask, "Do you think you would be interested in doing and learning something  if you were given a machine that was frustrating to use?" 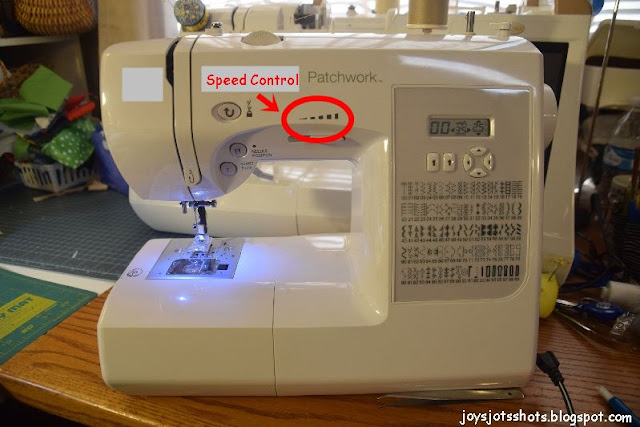 With that said, the FIRST thing to look for is SPEED CONTROL.
I've seen especially young people have a very hard time running the machine at the right speed.
When they first push the foot control, it blasts away, usually scaring the new student out of their seat,
while grabbing the piece of cloth and taking off with it.
More time is needed with the student getting used to speed, which can be done,
but the fear has set in which most likely won't be needed if a speed control is used. 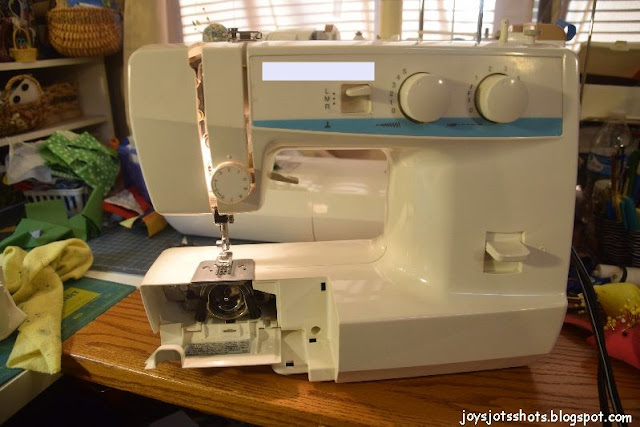 Number 2: DROP IN BOBBIN is easier to use.
The machine above doesn't have a drop in bobbin, it has a side loading bobbin
which takes extra time for a new, especially young student to understand how to hold the bobbin
and how to insert it correctly. 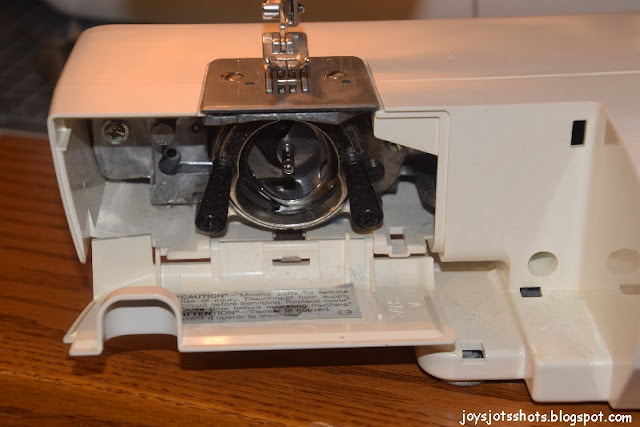 If the bobbin case isn't loaded correctly, it won't work. A needle break can happen.
The bobbin casing is missing from this machine, so at this point this machine cannot be used.
Also, if you use this machine in a drop table bringing the bed level to the throat (working space) of the machine,  it can be frustrating to get down under the surface to change the bobbin. 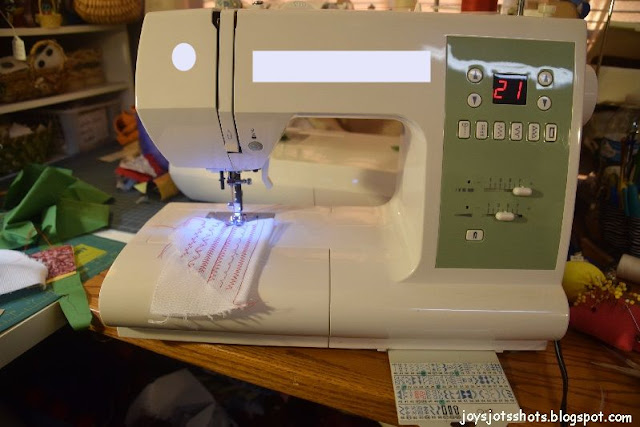 Feature number 3:
Needle Up/Down feature of some kind.
The machine above does not have a button to set the needle to stop in up or down position
when the machine stops.
However, this machine does always stop in the UP position, which is a good second choice.
One thing a new sewist must learn is not to take the fabric out and cut the thread until the
needle is at its highest position.
Not almost high, but the highest.
I usually let students learn this via natural consequences.
When they forget, the machine comes unthreaded the next time they start sewing.
I just remind them why it happened.
For some it takes many, many tries and LOTS of time is spent in rethreading the needle. 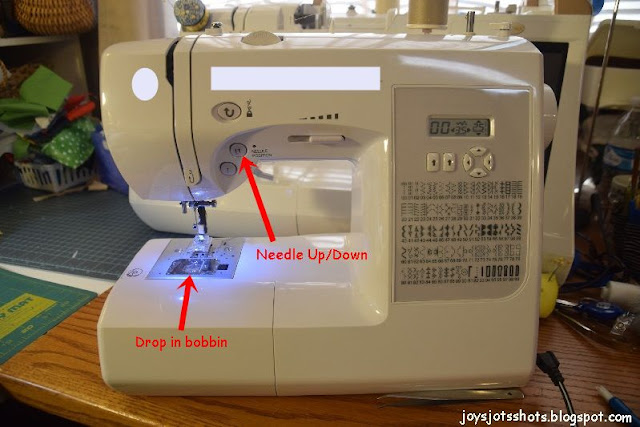 This machine has a button to set which position you want your needle to stop.
The handwheel has to be turned if it stops in down position and you need to take out your fabric.
Hitting this UP/Down button does not move the needle.  Some do.
My little brother always stops in up position, but
I have a button to push to make the needle go down instead of turning the hand wheel. 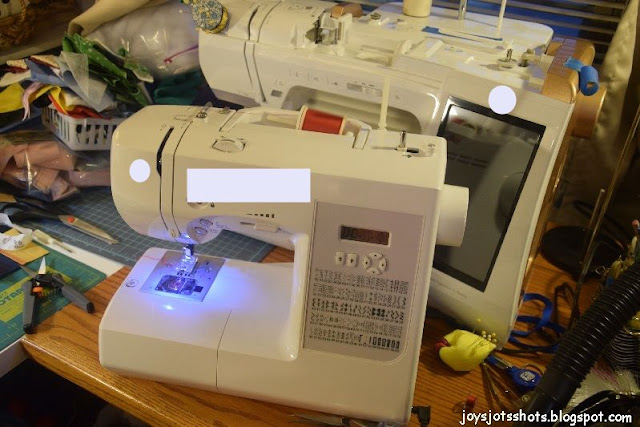 Those are the 3 features I think a Beginner needs. Anything else is a plus that makes learning a better experience.
A threader is nice. Even though younger people have better eyesight than me, some still struggle.
Several different stitches are fun, but rarely used.
An easy to use reverse button for backstitching is something to think about.
Easy to thread.
Thread cutter is getting fancy and very nice.

If you follow the logic of, "I'm buying cheap first to see if they are really interested to save money,"
will you really save money?  If the learner becomes frustrated, which can easily happen with a hard to use machine, then 90$ was thrown away. Or, if they were determined and stuck with it and become an avid sewist,  you spend 90$ for a trial machine and decide later to get one that works better for $300 at which point you've spent 390$?
********
"THINK about it."
********