Mother had several sweat shirts.  I thought the Christmas sweat shirts would make great seasonal pillow covers.
Envelope pillow covers were made for this project so they can go over daily pillows, or be changed out with another cover to be used the rest of the year. 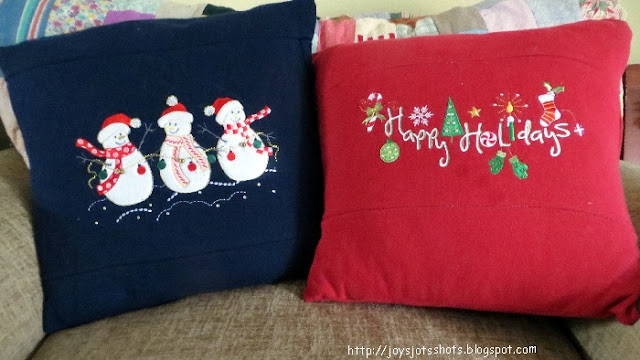 Two pillow covers were made in a very short period of time.
Actually one was made in between me giving directions to a sewing student making a book bag. 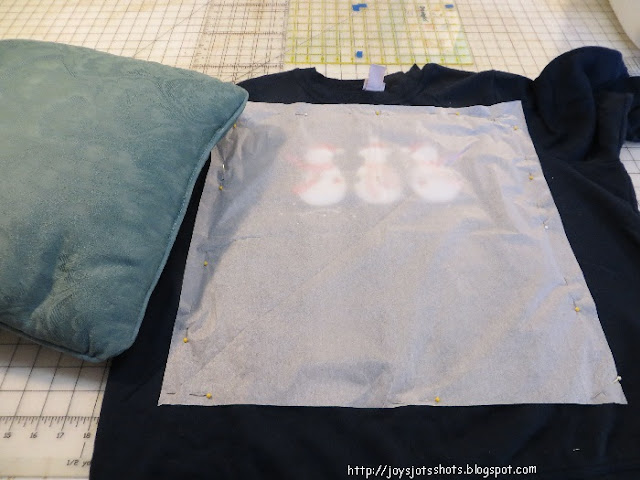 My Process:
Measured pillow to be used & cut out a tissue square.
With stretchy sweatshirt fabric, I didn't add extra for seams.
(For woven fabrics add ½ inch seams all around.)
Folded tissue in half to find center, laid just under the neck stitching.
(Tissue allows ability to see decoration on sweatshirt front.) 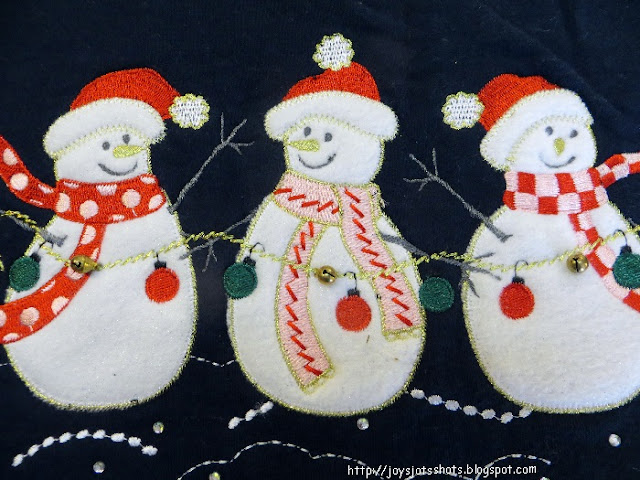 Cut through top layer (front) only.
(Good thing about seasonal wear is that it hasn't been washed much,
therefore usually not faded.) 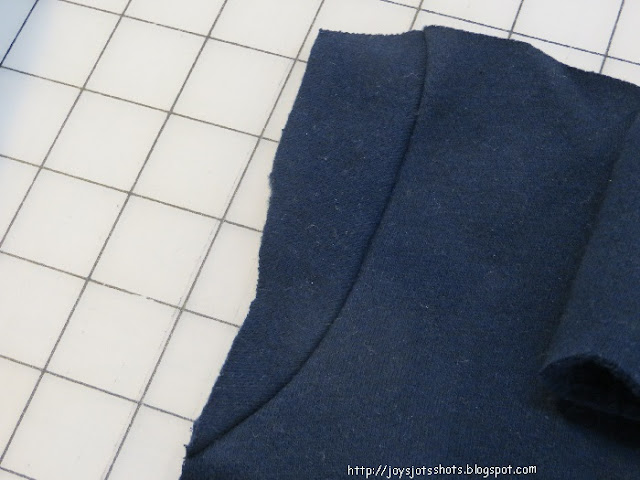 For these pillows the square had to be cut into the arm section. 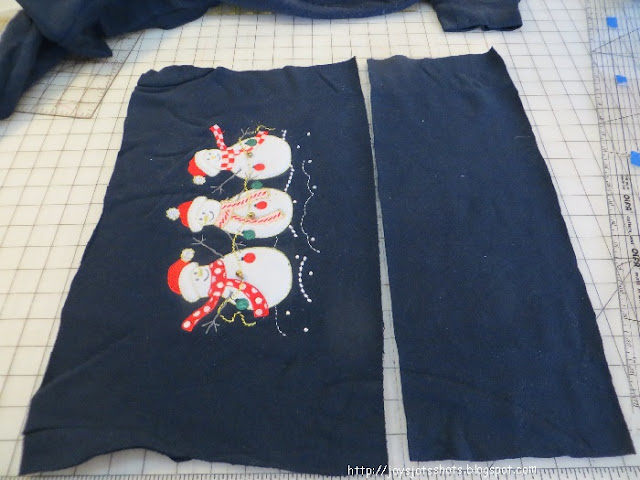 In the case of both of these shirts, the decoration set too high on the square.
The bottom of the square was cut off, leaving the snowmen in approximately the center of the rectangle. 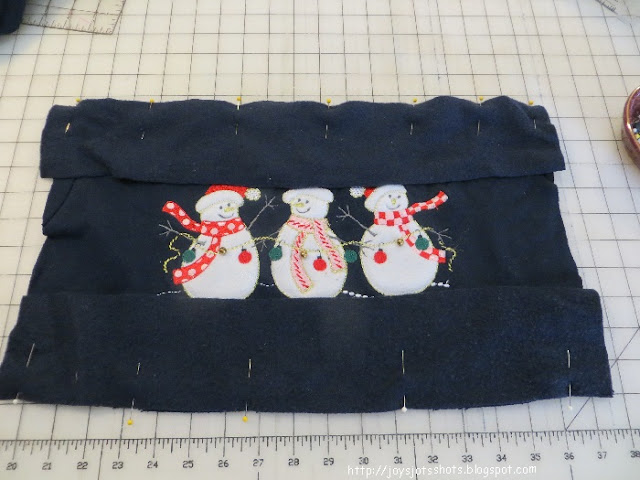 The bottom piece was cut in half. Pinned to top and bottom.
(Yes, the bottom could have been left on and not stitched back again,
but this allowed for a symmetrical look.) 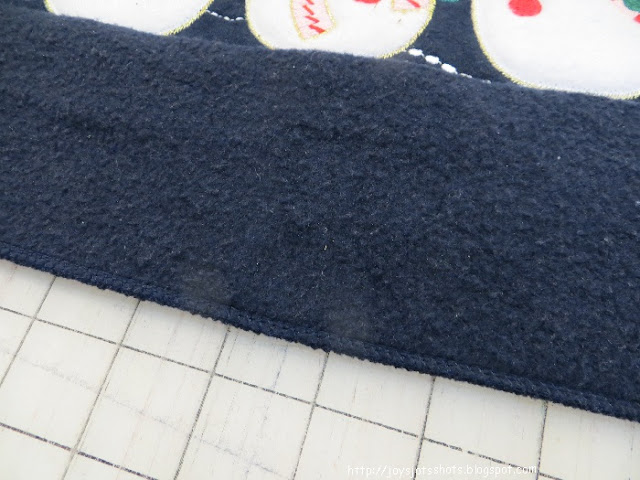 I used the serger which made the project quick, and by adjusting the differential feed
the seam was flat, not puckered or wavy when finished. 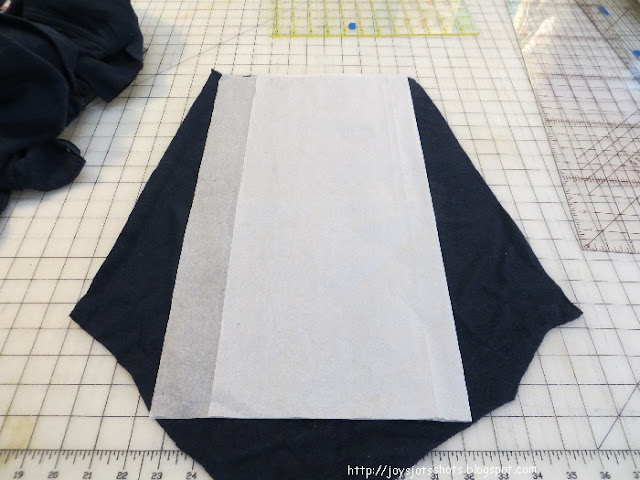 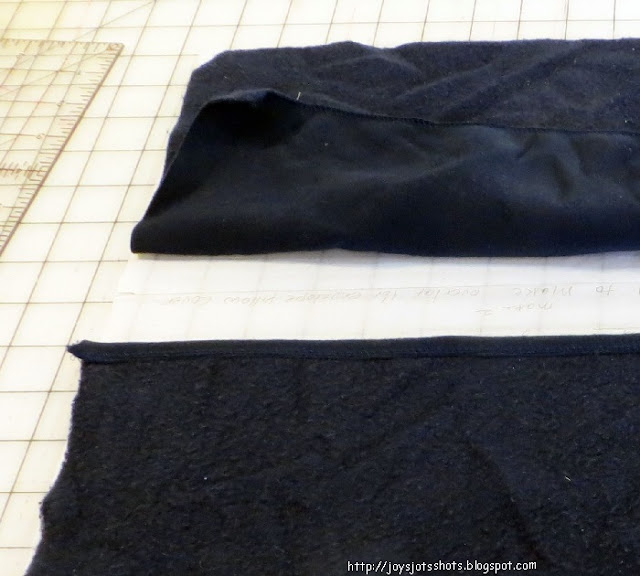 Both sections were serged along the edge.
One one was turned and top stitched so there would be less bulk. 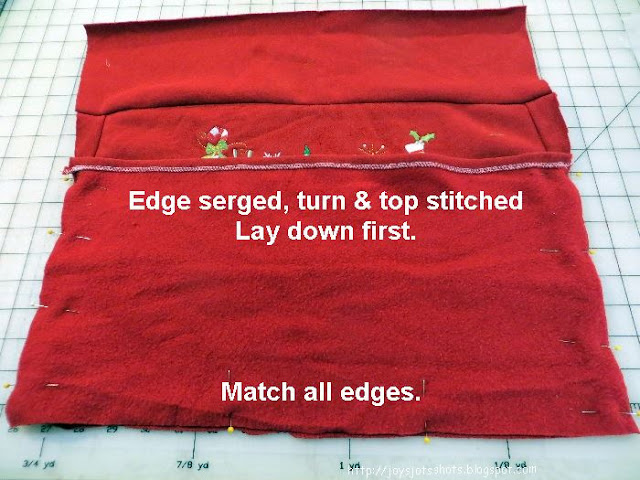 Layered the backs to the front as shown. 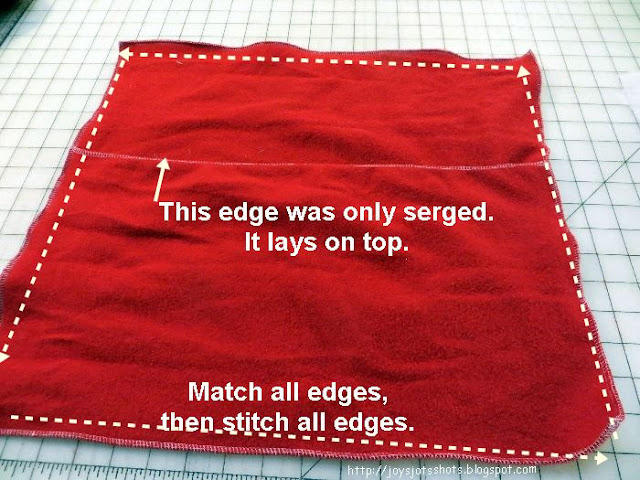 All outside edges were matched,
with the backs overlapped across the center.
Again,I laid the top stitched piece first
right sides together with the front pillow piece. 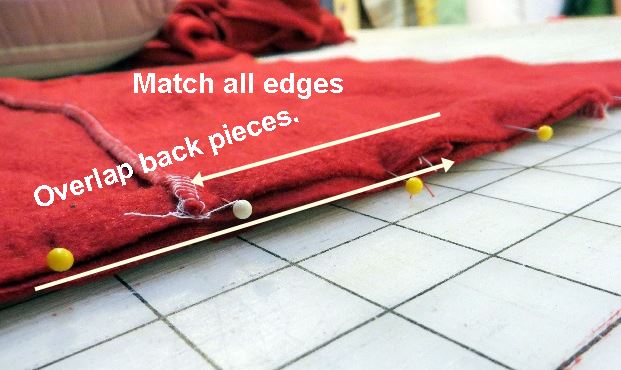 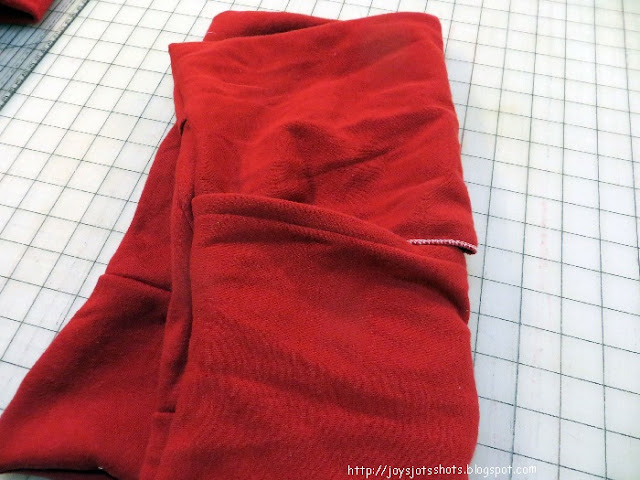 Turned right side out. 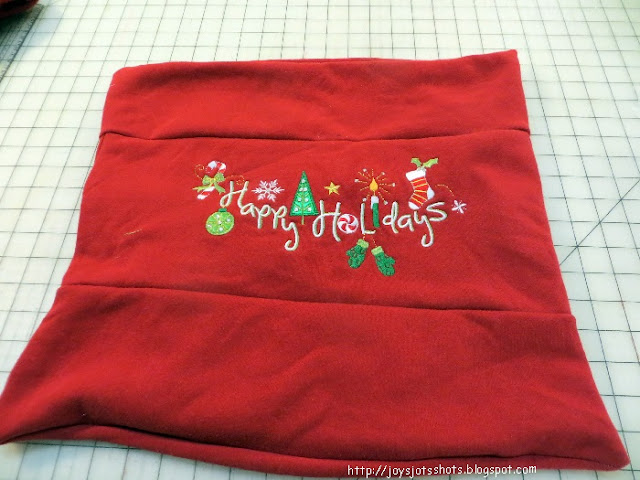 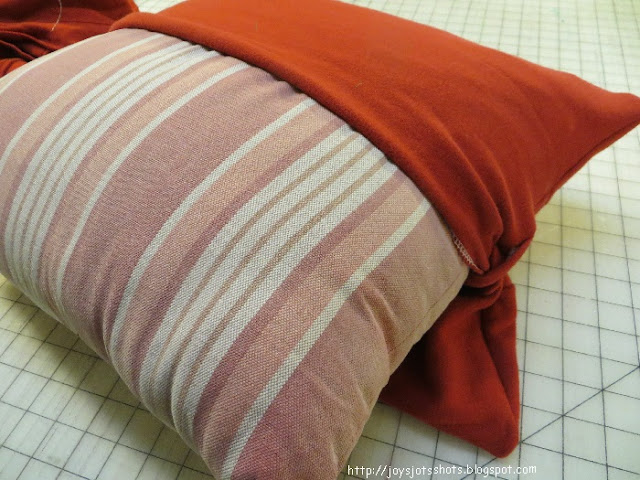 Stuffed the pillow into the underlap part first.
Reached in and placed the corners. 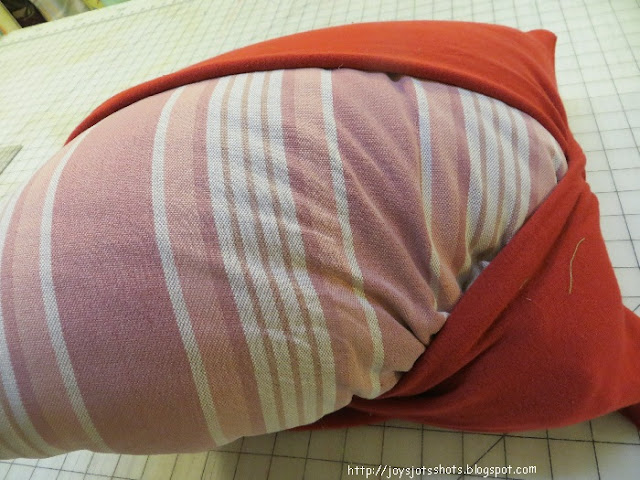 Folded the pillow to set in other half.
Stuffed the corners of pillow into corners of cover. 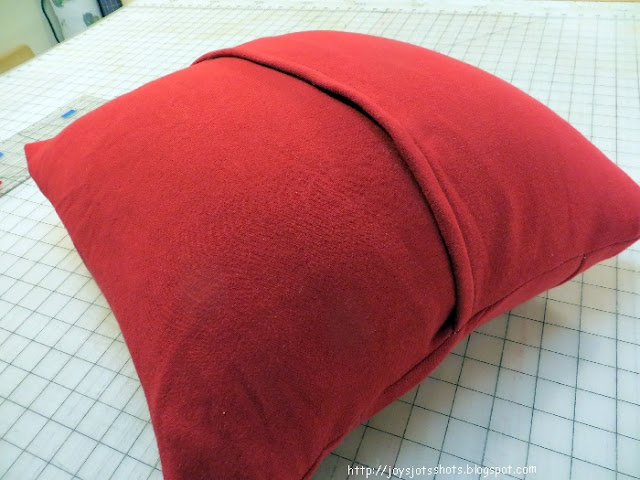 Tweaked and moved the cover around a bit
until the opening on the back laid flat
and seams were in correct location. 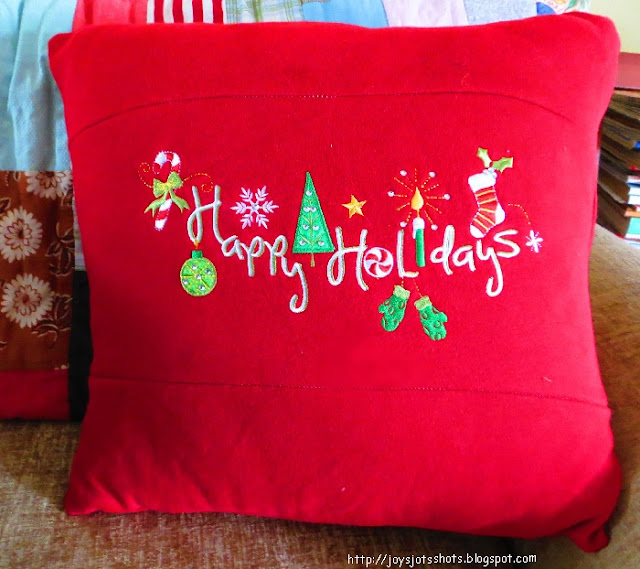 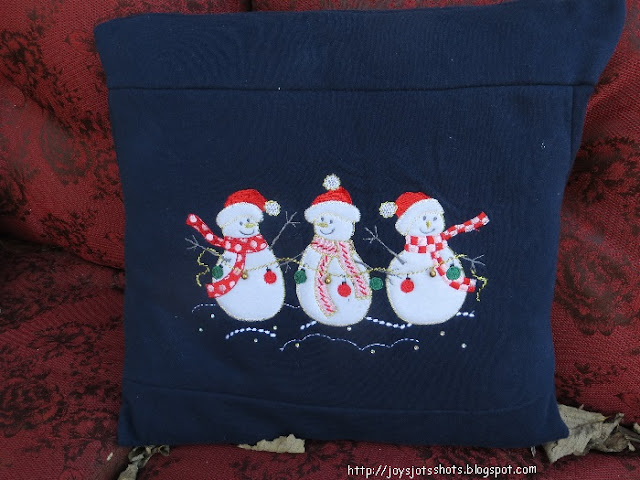 Not sure who will get these.