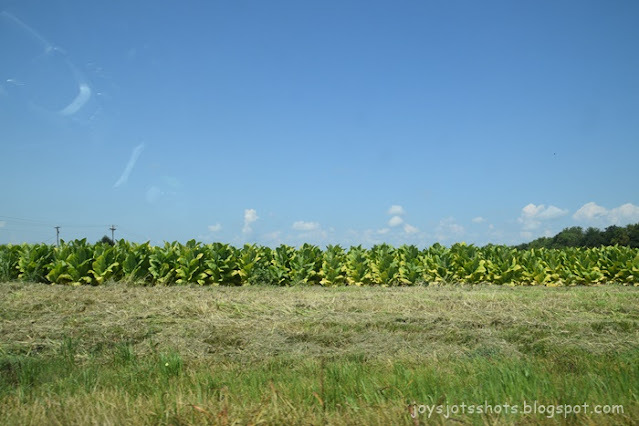 Many of my childhood summer days were spent in the tobacco patch.
Starting at a very early age of about 5 or 6.
No, I did not like it, but now I understand how it taught me a LOT about life.
We'd get up early while the dew was still on the ground.
At first as a young child,
I didn't do much as part of "setting" tobacco.
I was not able to handle equipment, bundles of plants were too heavy,
and as I was probably a careless child that caused too much damage
in the plant bed, I did not pull plants for the setter.
When I got around 10, I started pulling plants from the plant beds.
In early June, I got out of bed early to beat the heat
and chopped out weeds in what seemed to be the longest rows of tobacco in the world.
Dad always had us leave the field by 9 due to heat, and I played in the cool yard the rest of the day.
When the tobacco was grown, we crawled through the rows of tall tobacco,
and took the leaves off the bottom of the plant.
This was called "priming tobacco."
Farmers were allowed to raise an allotted number of acres of tobacco,
so you got as much as you could out of every single plant.
We'd prime those leaves
before they fell off the plant when the tobacco was cut
Then after the wagons were pulled through the fields to pick up the tobacco,
it was my job to pick up leftover leaves
laying on the ground and barn floor that weren't too damaged.
Did I get paid for chopping out weeds, pulling plants,
and collecting leaves at age 6?
Like all tobacco farmers, I got paid in the winter when the tobacco sold.
The leaves I collected were eventually sold in my name,
and that money later went toward my college education.
Usually about 4 or 5 farmers' families worked together
to set, harvest and maybe strip the tobacco.
It was a great "team" effort,
and a fun social time working with others, some my age.
Are you beginning to understand how I learned a lot about life?
Eventually, the Government changed from allotting acreage to poundage
so we had no need to prime or pick up leaves.
So in my pre teen years, I pulled plants, chopped weeds
and when my feet could reach the pedals,
I drove the tractor pulling the wagon
so farmers could load the tobacco.
I stripped a LOT of tobacco,
especially later when I had kids
to make Christmas money for Santa gifts.
Today, children are not allowed to be in the field due to child labor laws.
For that matter, Kentucky's once major cash crop is gone.
It's rare to see a tobacco field.
Under the Clinton administration,
tobacco poundage was bought from farmers and only a little is left.
We were leaving the farm, so sold ours.
Farmers were promised other comparable cash crops could be raised.
Labor became scarce.
No one wanted to do the hard work.
Eventually many sold their poundage to get what monies they could.
Farmers scrambled around to find other crops that would bring the same money.
So far no crop has been found that brings in the same income as tobacco.
Corn, soybean and wheat is grown by large farmers
that rent out several of the acres once used by tobacco.
A few turned to another vice.
Vineyards.
I have memories every summer about the tobacco patches
you rarely see in KY now.
Posted by JOY @ http://joysjotsshots.blogspot.com/ at 8:00:00 AM